Get Up – Enabling Micro Donations towards Climate Activism

To be honest, the problem framing for this product isn't easy to explain:
In 1972, the Club of Rome commissioned the study "The Limits to Growth", which was conducted by Dennis and Donella Meadows. This study was the first to forecast the future development of the world using the System Dynamics methodology within a framework of various scenarios.

So for 49 years, humanity has known about a serious problem that is coming. And the design disciplines and designers have known it too. Yet there has been only marginal progress in how products are made, how we consume and how we cultivate our existence – in relation to our CO2 emissions.

Thus, at the latest with the appearance of Greta Thunberg in 2018, it was clear that environmental activist movements do not accept a continuation of the status quo and are increasing their pressure on politics and society. With all the sobriety I exercise as a designer and with all the good faith I have in the materialistic interventions in our production chains and supply chains to bring a measurable change in the guise of a reduction in CO2 reductions, I strongly believe that the radicalization and increased presence of the environmental movements is absolutely necessary to initiate and manifest aspects of tangible change.

So for me and Tino Pfaff from Extinction Rebellion, as well as a few other activist friends, the question of how we can support the environmental movements was the starting point for developing the vision of this product.
It was convenient for us that the hackaton #neustart:klima, initiated by campact, was about to take place in a few days.
‍
With the question of how we could participate in this hackaton in mind, we went to the nearest bar and the initial design process turned out to be - conceivably simple - as follows:

Beer and chats with climate activists.

I deliberately emphasize the informal setting of the initial ideation process, because I have learned that having a close connection to potential stakeholders and users is an immeasurable asset for the design process of a product. While design thinking frameworks work great for exploring a problem in the context of business needs and values, the process of deliberation is crucial for getting real, genuine and unvarnished insights to uncover the true needs of people - and finally users of products.

So the evening went pretty well and when I outed myself as a designer for apps and the like, several of those typical "It would be good if there was an app that would..." moments emerged.
‍
Since Extinction Rebellion is a climate alarm movement, and all climate movements benefit from donations, we quickly came to the basic idea of Get Up as an alarm clock, that triggers microdonations, when users hit the snooze button. Before i went into the process of crafting first wireframes and screen designs, we were dreaming about what the marketing narrative of such a product could be,to provide a useful product on the one hand and a gesture that serves as a thought-provoking impulse on the other.
‍
The grassroots claim was formulated that evening:

… and do something about climate change or hit snooze and support climate activists with a micro donation. With these conceptual considerations in mind, we went about registering for the Hackaton to assemble a team and turn the idea of the project into a more concrete form.

With the start of the hackaton, the way of working became more formal and my way of working more methodical. A total of 5 participants took part in the project. After an introductory talk and the verbal description of the idea, I started the moderation of the hackaton with a strategy finding for our business and product. I used templates for the business model canvas, value proposition canvas and business objective canvas that I had prepared for the work with my clients as a freelance designer. We then proceeded to have an absolutely compressed design sprint. We agreed on the challenge:

The time constraint meant that even the very compressed and effective Design Sprint framework outlined by Jake Knapp would not work for us. So our steps for the 2 days were: 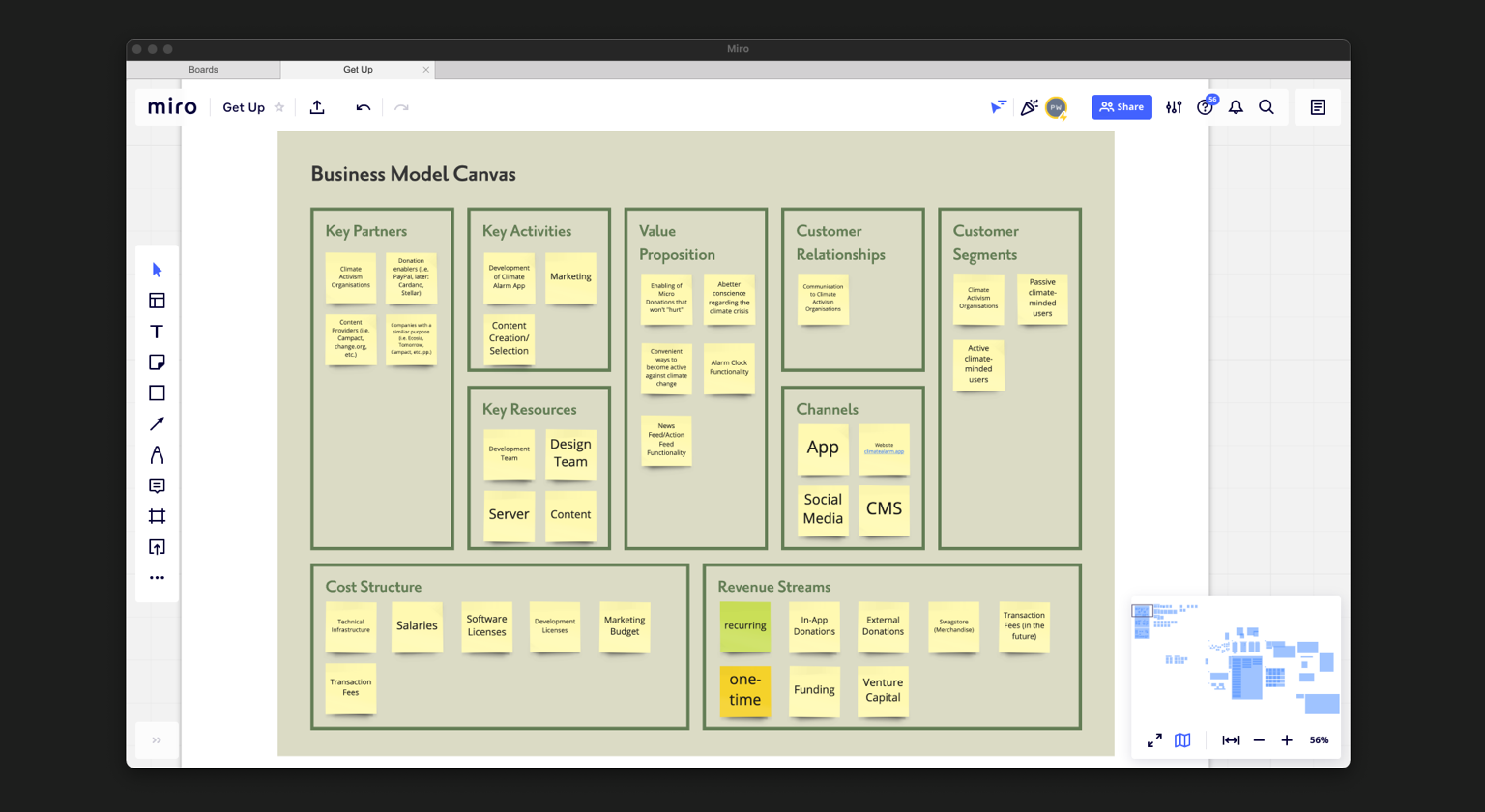 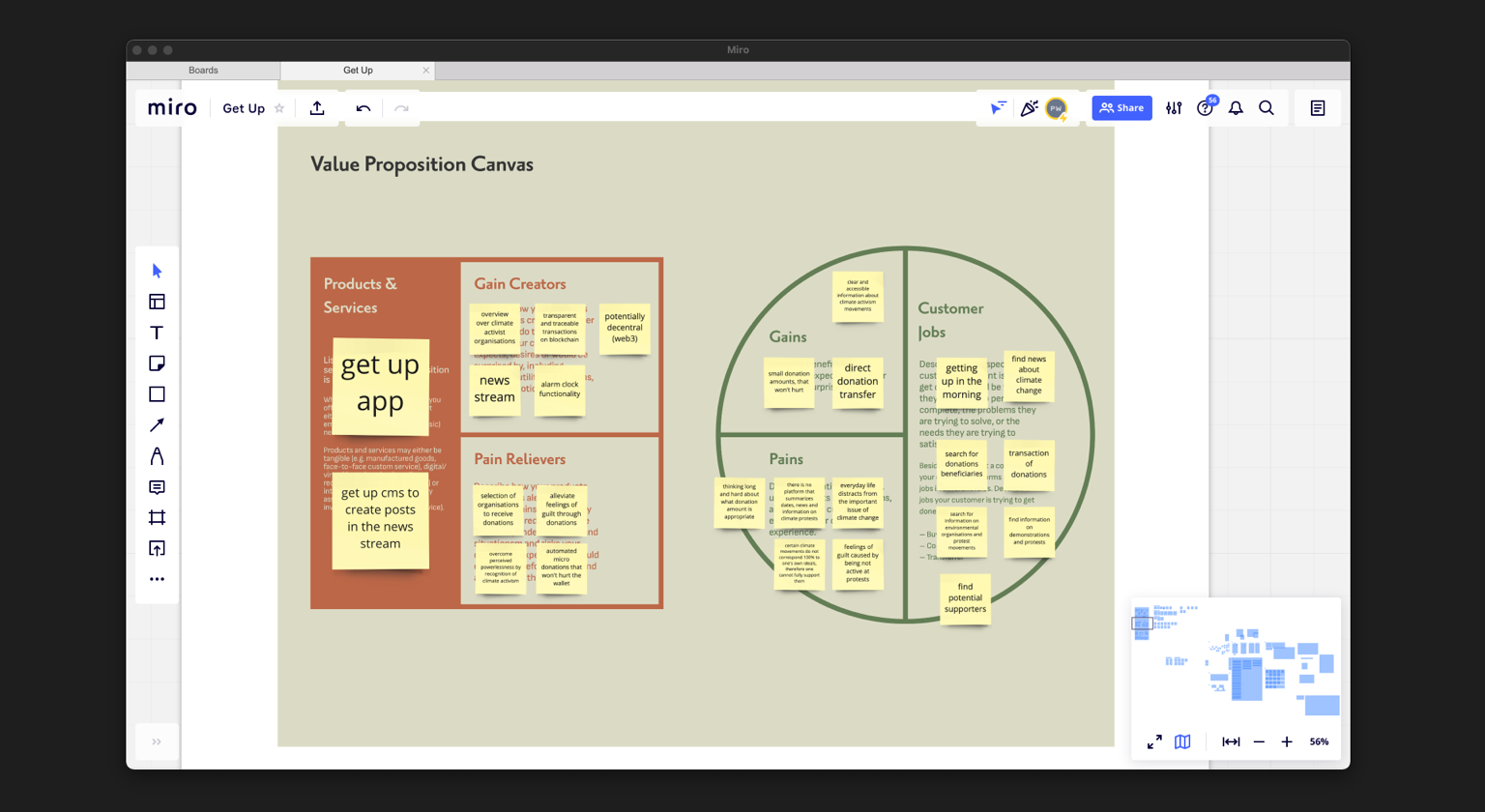 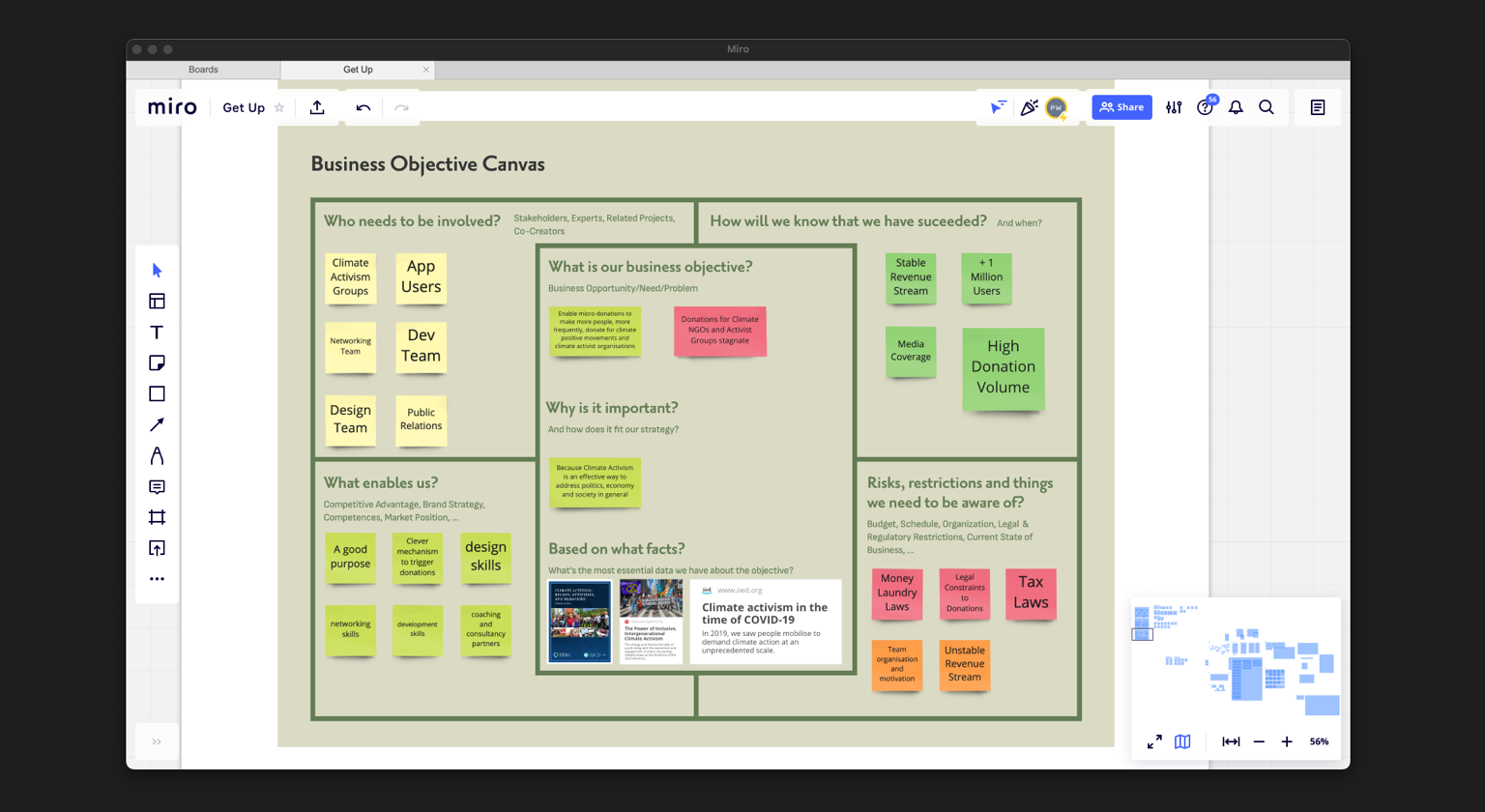 To find out users gain points, pain points and job to be done, we quickly went over the Value Proposition Canvas. To define the constraints, we worked on the Business Objective Canvas. Due to time constraints, we had to forego the extensive creation of a customer journey map, that usually includes assumptions about the emotional reception by users. We were lacking research data in this regards, anyways. So we mapped a rudimentary flow: 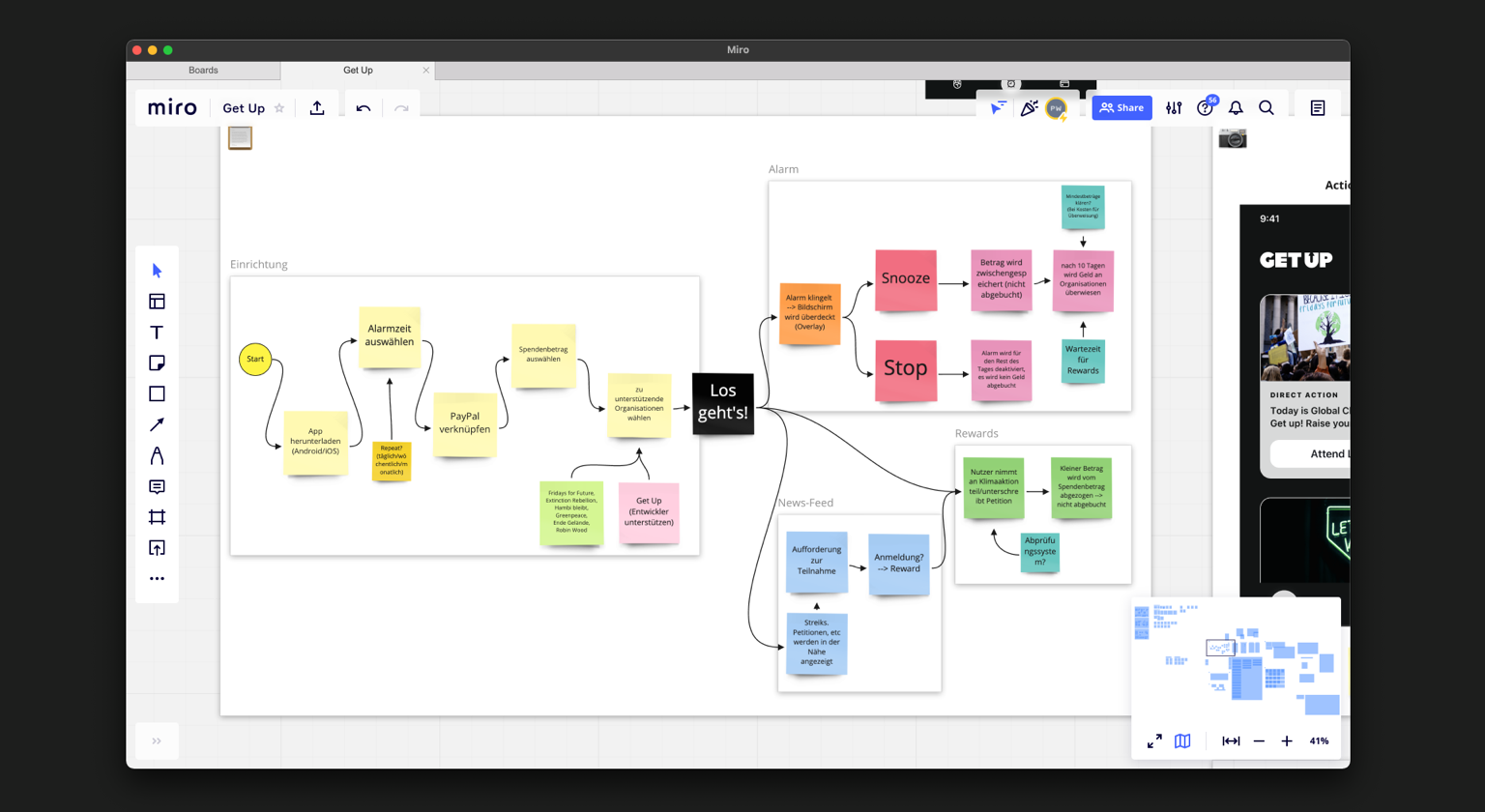 During the workshop, participants brought up the idea of incentivising participation in real-world events, such as attending a demonstration. We voted, that the incentive should consist of a small amount that is deducted from the donation burden which is added up by using the snooze function. The amount that was to be deducted from the donation load per snooze was to be freely selectable by the user. This also made it clear that we would first sum up the transactions of the donations and then trigger the transaction in a fixed cycle of 14 days if they reached a minimum amount of € 3. We estimated the minimum amount on the basis of paypal's transaction fees for donations.
‍
The product vision was essentially that transactions would be handled blockchain-based. However, in order to find an energy efficiency solution with a proof-of-stake consensus algorithm and a suitable cryptocurrency, we voted on to postpone this aspect of the product to a later date.
‍
Until then, paypal had to do the job, as it is a widely used payment service provider and therefore ensures us a large service optainable market range. Paypal is also quite user-friendly in terms of handling donations.
We spent some time researching payment service providers and the legal framework, as we knew that this was an important constraint to our project. 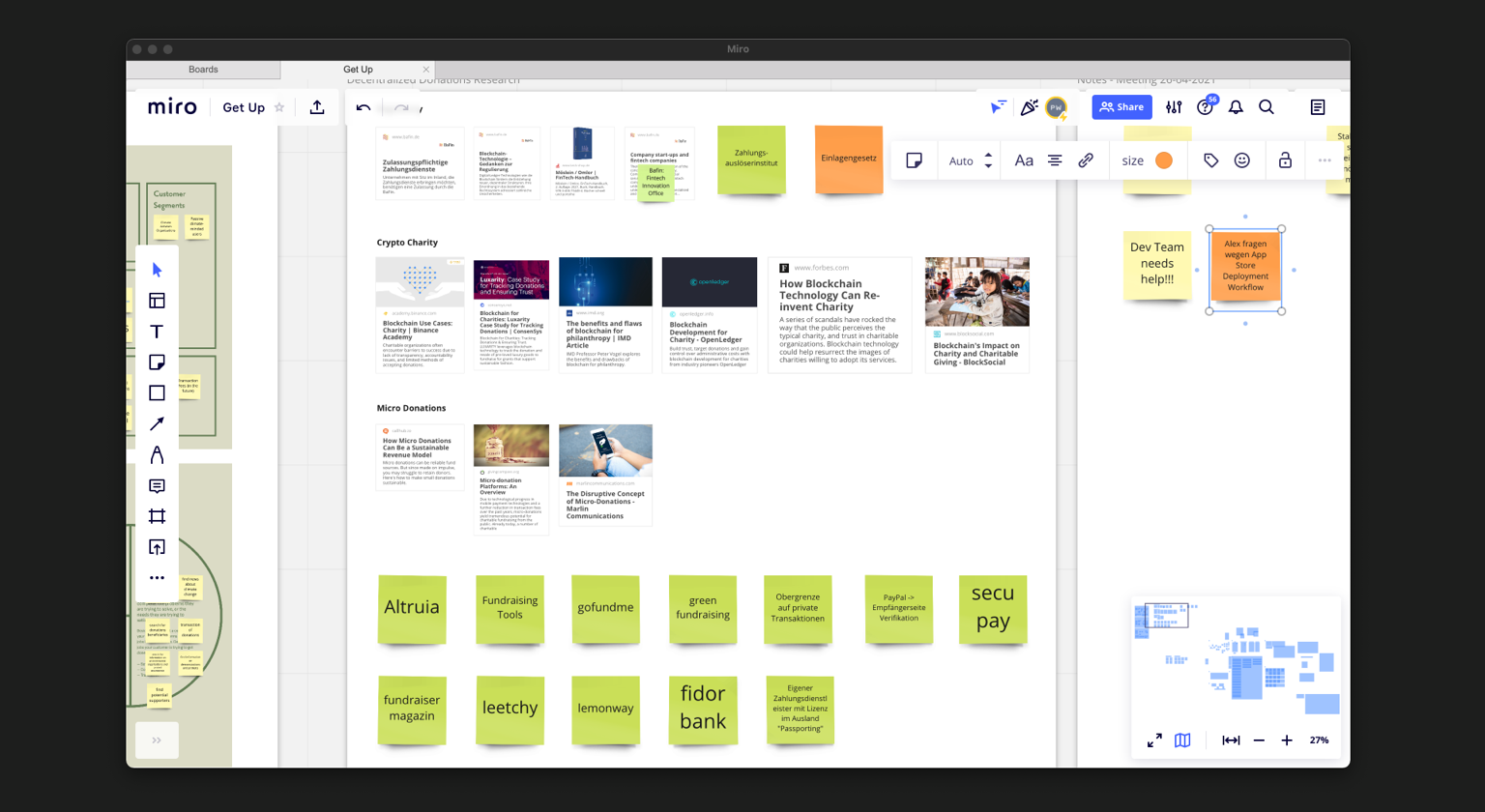 Since the goal at the end of the hackathon (after 2 days) was to deliver a convincing concept description, we distributed our tasks. As a designer, I am aware of the impact of visual content, so I took over to provide an initial style guide and brand design approaches for the app.

Our submission consisted of a pdf describing the concept and making statements about the realisation. I also summarised important interface elements and created a landing page – https://climatealarm.app/ – that is supposed to tease the project and present all the features. 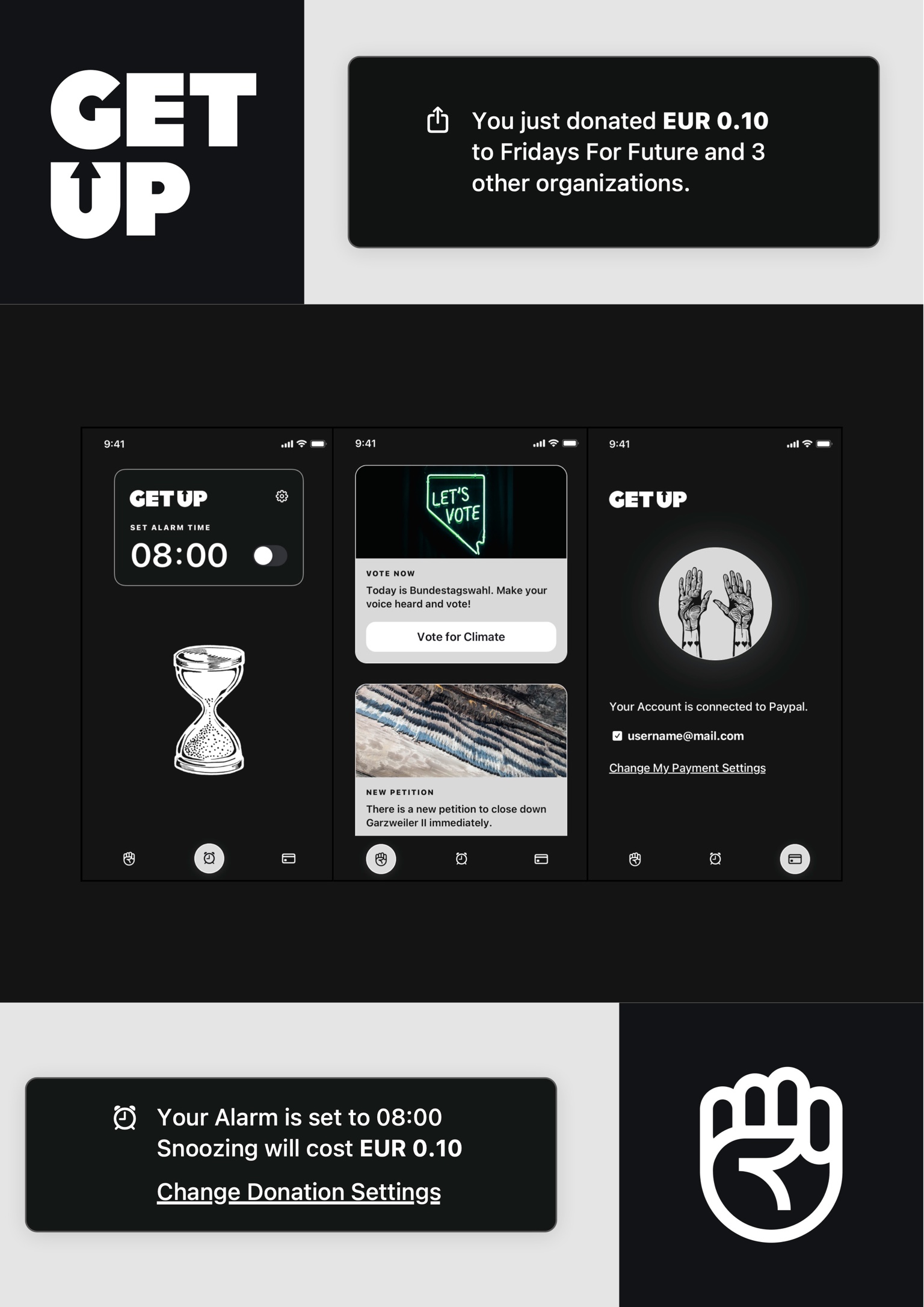 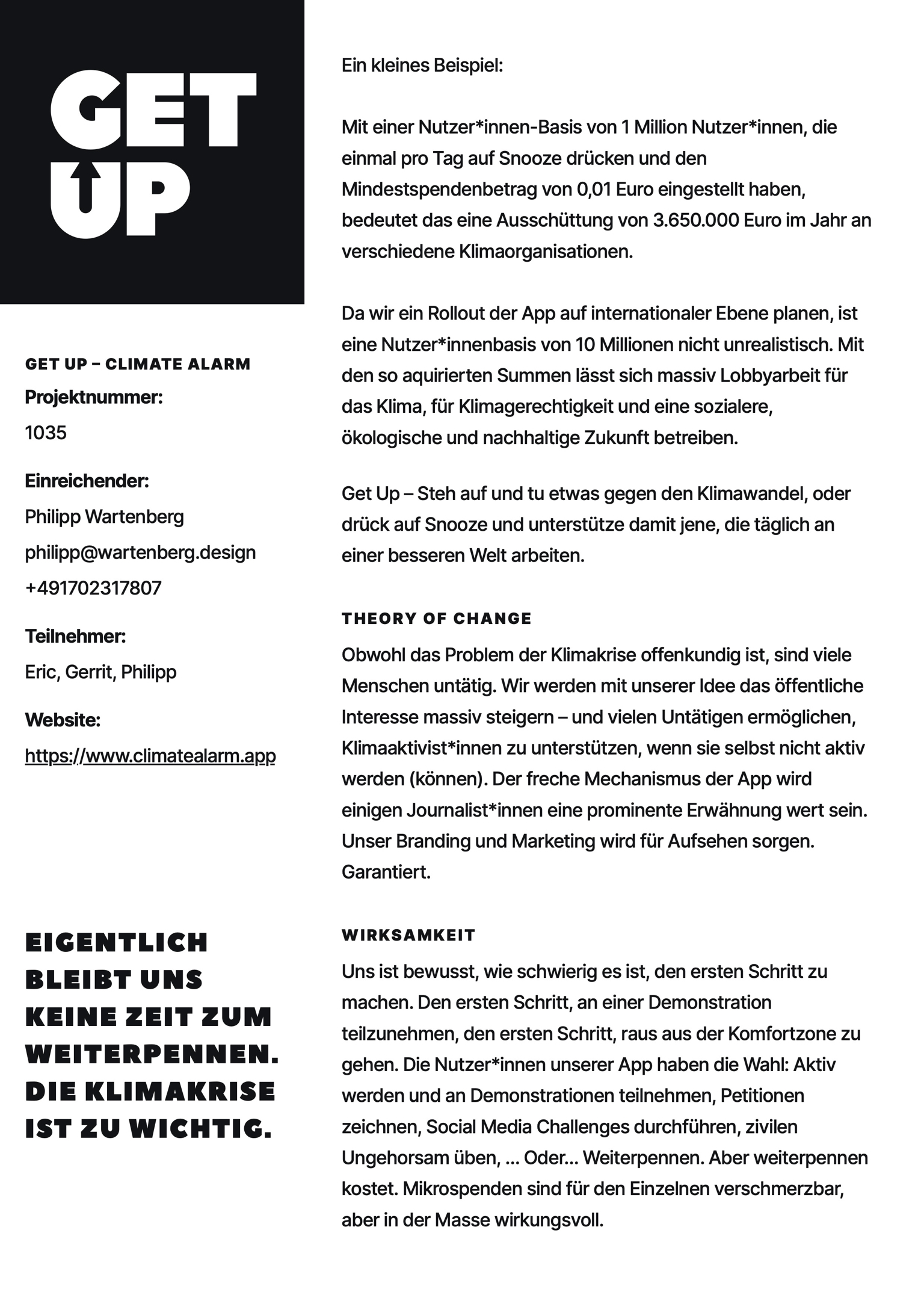 Unfortunately, to our great regret, we were not selected as a funded project. However, we did receive a special mention. When asked, campact said that they saw the hackaton more as a competition of ideas and that our idea was already so far developed that they thought we would not need support. They therefore preferred to support other projects that had it less easy than we did. Of course we appreciated this and can fully understand and respect it. Since we didn't want to stop with the project, we have now switched to looking for an angel investor and at the same time expanding our user research in cooperation with climate activist organisations. At the moment, the project is on hold, as many participants are limited by work or studies.
If you - dear reader of this case study - would like to support us or learn more about the product, please feel free to contact me directly or visit our product landing page first:
Visit Landing Page